Visit the small neighborhood of Kingsbridge, The Bronx, New York

What’s the History Of Kingsbridge?

This neighborhood is named after the King’s Bridge, which was built by enslaved Africans in 1693. The bridge is no longer there because construction has filled in the area. Because of slavery, there used to be many more African-Americans, but in the last decade, many whites have moved to this area. The architecture is based around Irish traditions and can be seen in the St John’s Roman Catholic Church on Kingsbridge Avenue near 231 st. Today, this neighborhood is a quaint area with big brand chains and housing developments. 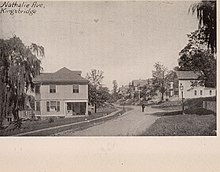 The original tablet was erected in 1914 to show where the original King’s Bridge was -- 100 feet ahead. Part of the plaque reads: “Over it marched the troops of both armies during the American Revolution and its possession controlled the land approach to New York City.” There’s some confusion as to where the actual bridge was, but nonetheless, it was in that area and past presidents and armies walked across it.

A late-night trendy spot for dinner, drinks, and lounging. The Bronx Alehouse This spot has been featured in The Wall Street Journal, The New York Times, and UPROXX. Friends can choose this spot for great hangouts.

Let Moishe’s Self Storage help you store your things. Our Bronx Storage Facility is conveniently located near Kingsbridge. We offer over 20 different storage unit sizes, available to individuals, students, and businesses. Moshe’s Self Storage serves all zip codes in the Kingsbridge, New York, area:

RELATED: 15 Top Things To Do In The Bronx, NY

RELATED: 7 Best Neighborhoods To Live In The Bronx In 2020