You’re not alone if you’re wondering about the best neighborhoods to live in Queens, NY. We at Moishe’s Self Storage rated each of the top seven neighborhoods with a five-star scale so you can have peace of mind when considering your move to this area. As you plan your move to Queens, NYC, we broke down livability in four categories:

If you’re considering a move to NYC in 2020, let us help. We’re professional movers in NYC and for more than 30 years, we’ve helped people just like you make the move to NYC. It’s our commitment to make your move as easy as possible. Do you need a storage unit while you transition? Take a look at our room options:

This neighborhood is a good option if you need access to public transportation. It’s also safe and relatively close to shops and grocery stores.

The area’s low crime rate is attributed to its seclusion and reputation as a “suburb within the city.” With a non-fatal assault rate of 14 per 100,000 people, Rego Park and Forest Hills’s rate of violent crimes per capita is less than that of the city as a whole.

There are not many shops in this neighborhood, but a few to mention are Rego Center, Mandee, century21, and Pier.

This is a great neighborhood to live in for safety and transportation. Housing cost and shopping is a little harder to come by though.

The chance of becoming a victim of either violent or property crime in Woodhaven is 1 in 45. Based on FBI crime data, Woodhaven is not one of the safest communities in America. Relative to Michigan, Woodhaven has a crime rate that is higher than 77% of the state’s cities and towns of all sizes.

The J, Z subway goes right through the neighborhood with the best stop being Woodhaven Blvd.

A few specialty shops are in this neighborhood. A few popular ones are Schmidt’s Candy, Planet Hobbywood, and New Cafe Sugar and Spice.

This is a very safe neighborhood, but when it comes to shopping, it doesn’t have many options. Housing cost is a little high and public transportation is nearby.

The overall crime rate in Ridgewood is 74% lower than the national average. For every 100,000 people, there are 1.93 daily crimes that occur in Ridgewood. Ridgewood is safer than 90% of the cities in the United States. In Ridgewood you have a 1 in 143 chance of becoming a victim of any crime.

The M subway line runs right through this neighborhood, and one can either stop at the Fresh Pond Road Station or Seneca Avenue Station to get where you are going.

This is a great place to live. With great transportation and surrounding shops and grocery stores, you’ll always have options for food. The only thing holding this neighborhood back is the crime rates and apartment costs.

With a crime rate of 50 per one thousand residents, Astoria has one of the highest crime rates in America compared to all communities of all sizes – from the smallest towns to the very largest cities. One’s chance of becoming a victim of either violent or property crime here is one in 20.

Any stop along the N, W subway service will get you where you need to go. It runs right through the neighborhood. Stops Ditmars Blvd Station (north side) or 36th Avenue (south side) will take you on your journey.

There are a few specialty and clothing shops in this neighborhood. A few to note are Lavender Label-Little Soap Shop, The Brass Owl, and The Astoria Bookshop.

As far as supermarkets and grocery stores, there are plenty of options. A few to mention are Trade Fair, CTown Supermarkets (a few), and Titan Foods.

Long Island City is closest to Manhattan which makes for easy travel. Public transportation is very accessible and there are a few grocery stores and shops in the neighborhood.

Many public transportation subways run in or near Long Island City. The closest one is in the heart of the neighborhood: G subway at 21 Street-Van Alst Station.

For grocery stores, there are Key Food Supermarkets, E & I Deli and Grocery, Natural Frontier Market, and Millie’s Deli & Grocery.

Overall, this is a safe and convenient neighborhood to live in. The only downside is the grocery stores and shops — there are not many nearby.

Queens has an overall crime rate of 13 per 1,000 residents, making the crime rate here near the average for all cities and towns of all sizes in America. According to our analysis of FBI crime data, your chance of becoming a victim of crime in Queens is 1 in 75.

The E, F subway runs around the perimeter of the neighborhood. The best stop is Sutphin Blvd.

There are not many shopping options other than R & P Smoke Shop and Moto Sports Tires and Wheels.

All aspects of living in Richmond Hill are good except stores and grocery shopping. There are stores nearby, just not in the neighborhood. 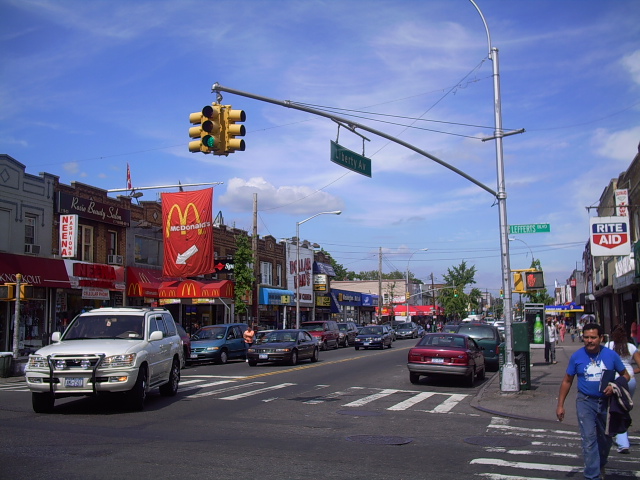 There are not many options when it comes to grocery stores. Key Food Supermarkets has a location here.

There are a few shops in the neighborhood like “Pawn Shop, Buy- Sell- Trade” and “Rubie’s Costume Company – Richmond Hill Flagship Store.” Your best bet, however, is to go south a few blocks were there are more shops.

Astoria, Queens: Where To Eat & What To See

7 Best Neighborhoods To Live In The Bronx In 2020

5 Tips For Moving Your Things From Bayside, Queens, New York